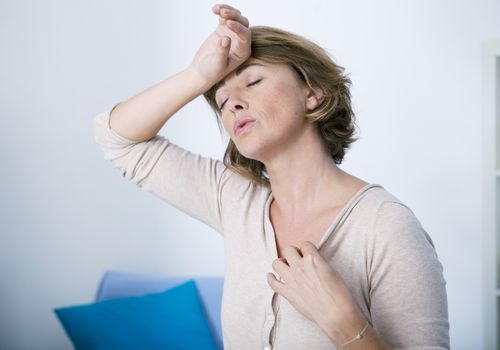 CBD For Menopause: Can It Help Alleviate Symptoms?

Like any natural transition, menopause can cause uncomfortable changes, including hot flashes, sleep disturbances, and mood shifts. Researchers have looked at many herbal and natural remedies for these symptoms, including CBD. In today’s blog we will cover menopause, menopausal symptoms and CBD’s effectiveness in mitigating or alleviating these symptoms. If you’re interested in learning more, keep reading.

What is menopause?
Menopause occurs 12 months after a woman’s last period. However, the transition period before menopause commonly begins between ages 45 and 55 and is called menopausal transition or perimenopause. During this period women will experience changes in their monthly cycles and may experience hot flashes, disruption in sleep, weight gain and other symptoms as their hormonal levels begin to decline.
As stated by the National Institute on Aging, “During the menopausal transition, the body's production of estrogen and progesterone, two hormones made by the ovaries, varies greatly. Bones become less dense, making them more vulnerable to fractures and because the body uses energy differently and fat cells change, making weight gain easier.”

CBD and the Endocannabinoid system
The Endocannabinoid system (ECS) is a molecular system responsible for regulating an array of processes in the body. There are at least two types of cannabinoid receptors: CB1 and CB2. CB1 receptors are found within the brain and central nervous system in addition to both female and male reproductive systems. CB2 receptors are present in the immune system and are responsible for immune and anti-inflammatory activity. Because CBD interacts with the ECS, helping further improve regulation and promote homeostasis, it makes sense to assume that it may help ease menopausal symptoms as well.

Other functions cannabinoid receptors are involved in:

What symptoms may CBD help alleviate?

Mood changes
The rapid hormonal fluctuations and physical changes associated with menopause can cause an increase in anxiety, mood swings, irritability, depression and difficulties with memory and concentrating. Several studies support CBD’s therapeutic potential in alleviating mood changes regarding anxiety and depression, although more studies utilizing human subjects is needed.

A 2014 review stated that studies involving animal models, performing a variety of experiments on the anxiety and depression, such as the forced swimming test (FST), elevated plus maze (EPM) and Vogel conflict test (VCT), suggest that CBD exhibited an anti-anxiety and antidepressant effects in animal models.

In a 2014 study utilizing an animal model, researchers state that their findings indicate that CBD could represent a novel fast antidepressant drug.

A 2019 double-blind study found that, compared to placebo, pretreatment with 300 mg of CBD significantly reduced anxiety in 57 male subjects.

Insomnia/sleep disturbances
The menopausal decline of estrogen is the primary cause of sleep disturbances. In fact, approximately 61 percent of women who are postmenopausal experience frequent bouts of insomnia. Healthline states that going through menopause can affect your sleep on three levels including hot flashes, hormone changes and medications. And CBD isn’t the only cannabinoid that has evidence of improving sleep. Antidotal evidence claims that CBN holds powerful sedative properties.

Research from the cannabis testing facility Steep Hill Labs discovered evidence of CBN’s ability to reduce pain, inflammation and provide anti-bacterial properties without any intoxicating effects. Additionally, it was reported that CBN is the most sedative of all cannabinoids. The company claims that consumption of 2.5-5mg of CBN has the same results as using 5-10mg of diazepam (Valium). And the sedative synergy is enhanced when consumed in conjunction with CBD.

A 2019 case series on Cannabidiol (CBD) in anxiety and sleep found that higher doses of CBD may be beneficial for insomnia and sleep related disturbances because it produces a sedative effect, whereas lower doses may produce energizing effects.